Gen. Joshua Thomas Owen
Brigade commander at at the Battle of Wilderness, Spotsylvania and Cold Harbor. Brigade included NY 152, PA 69, 106, 71 and 72.
Profile at Find A Grave

Books about the regiment:

The Veteran Volunteers of Herkimer and Otsego Counties in the War of the Rebellion; Being a history of the 152nd NYV (Henry Roback)

Records and links
Database of prisoners

Andersonville, or Camp Sumter as it was officially known, was one of the largest of many established prison camps during the American Civil War. It was built early in 1864 after Confederate officials decided to move the large number of Federal prisoners kept in and around Richmond, Virginia, to a place of greater security and a more abundant food supply. During the 14 months the prison existed, more than 45,000 Union Solders were confined here. Of these, almost 13,000 died from disease, poor sanitation, malnutrition, overcrowding, or exposure to the elements.

The pen initially covered about 16 1/2 acres of land enclosed by a 15 foot high stockade of hewn pine logs. It was enlarged to 26 1/2 acres in June of 1864. The stockade was in the shape of a parallelogram 1,620 feet long and 779 feet wide. Sentry boxes, or "pigeon roost" as the prisoners called them, stood at 30 yard intervals along the top of the stockade. Inside, about 19 feet from the wall, was the " DEADLINE ," which the prisoners were forbidden to cross upon threat of death. Flowing through the prison yard was a stream called Stockade Branch, which supplied water to most of the prison. Two entrances, the North Gate and the South Gate, were on the West side of the stockade. Eight small earthen forts located around the exterior of the prison were equipped with artillery to quell disturbances within the compound and to defend against feared Union cavalry attacks. The first prisoners were brought to Andersonville in February, 1864. During the next few months approximately 400 more arrived each day until, by the end of June, some 26,000 men were confined in a prison area originally intended to hold 13,000. The largest number held at any one time was more than 32,000- about the population of present-day Sumter County- in August, 1864. Handicapped by deteriorating economic conditions, an inadequate transportation system, and the need to concentrate all available resources on the army, the Confederate government was unable to provide adequate housing, food, clothing, and medical care to their Federal captives. These conditions, along with a breakdown of the prisoner exchange system, resulted in much suffering and a high mortality rate.

Andersonville Prison ceased to exist in May, 1865. Some former prisoners remained in Federal service, but most returned to the civilian occupations they had before the war. During July and August, 1865, Clara Barton, a detachment of laborers and soldiers, and a former prisoner named Dorence Atwater, came to Andersonville cemetery to identify and mark the graves of the Union dead. As a prisoner, Atwater was assigned to record the names of deceased Union soldiers for the Confederates. Fearing loss of of the death record at war's end, Atwater made his own copy in hopes of notifying the relatives of some 12,000 dead interred at Andersonville. Thanks to his list and the Confederate records confiscated at the end of the war, only 460 of the Andersonville graves had to be marked " Unknown U.S. Soldier." 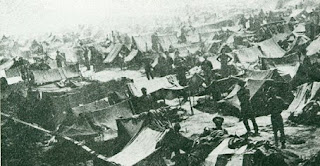 
Jerusalem Plank Road
First Battle of Weldon Railroad Virginia
American Civil War
June 21-24, 1864
On June 21, the Union II Corps, supported by the VI Corps, attempted to cut the Weldon Railroad, one of the major supply lines into Petersburg. The movement was preceded by Wilson's cavalry division which began destroying tracks. On June 22, troops from Lt. Gen. A.P. Hill's corps led by Brig. Gen. William Mahone counterattacked, forcing the II Corps away from the railroad to positions on the Jerusalem Plank Road. Although the Federals were driven from their advanced positions, they were able to extend their siege lines farther to the west.

June 1, (1864) started at night for Cold Harbor. About 2 p.m. the following day reached Cold Harbor, much wearied with the march. 3d, charged a strong position of the enemy and were repulsed, but held the ground within 10 rods of the enemy's works, and built pits under severe fire. Casualties in regiment, 13. Remained in this position under constant fire until night of Sunday, June 12.
Very respectfully, T. O'BRIEN, Major, Commanding Regiment.

Description: On May 31, Sheridan’s cavalry seized the vital crossroads of Old Cold Harbor. Early on June 1, relying heavily on their new repeating carbines and shallow entrenchments, Sheridan’s troopers threw back an attack by Confederate infantry. Confederate reinforcements arrived from Richmond and from the Totopotomoy Creek lines. Late on June 1, the Union VI and XVIII Corps reached Cold Harbor and assaulted the Confederate works with some success. By June 2, both armies were on the field, forming on a seven-mile front that extended from Bethesda Church to the Chickahominy River. At dawn June 3, the II and XVIII Corps, followed later by the IX Corps, assaulted along the Bethesda Church-Cold Harbor line and were slaughtered at all points. Grant commented in his memoirs that this was the only attack he wished he had never ordered. The armies confronted each other on these lines until the night of June 12, when Grant again advanced by his left flank, marching to James River. On June 14, the II Corps was ferried across the river at Wilcox’s Landing by transports. On June 15, the rest of the army began crossing on a 2,200-foot long pontoon bridge at Weyanoke. Abandoning the well-defended approaches to Richmond, Grant sought to shift his army quickly south of the river to threaten Petersburg.
Posted by Ric Manning at 6:26 PM