Quaker Road, Va., March 29, 1865. 1st Division, 5th Army Corps. When Gen. Grant began, on the morning of March 29, to extend his lines to the left, to envelop the right of the Confederate works in front of Petersburg, the 5th corps, Maj.-Gen. G. K. Warren commanding, moved out at 3 a.m. to the junction of the Vaughan and Quaker roads where a junction was to be effected with the left of the 2nd corps. About 5 o'clock the enemy's skirmishers were driven away from the crossing of Rowanty creek, and at 8 o'clock the head of Warren's column reached the cross-roads. About noon he received an order from headquarters to move up the Quaker road to the little creek called Gravelly run.

Griffin's division (1st) was at once started, but upon arriving at the creek found the bridge gone and a small force on the opposite bank to resist the crossing of the stream. Although difficult to ford, a skirmish line succeeded in getting over, when the Confederates retired after firing a few shots, thus giving the pioneers an opportunity to rebuild the bridge. A pontoon bridge was also thrown across the creek, Griffin's division crossed over, followed by Crawford's, the latter taking position on Griffin's left. The line then advanced the resistance of the enemy gradually increasing until between 3 and 4 p.m., when a heavy force was found drawn up in line of battle near Arnold's old sawmill.

The fight was opened by Chamberlain's brigade, which moved forward under a heavy fire, driving the enemy from a piece of woods and advancing his line to the edge of the timber. A few minutes later the Confederates returned to the attack, the greater part of Anderson's and Johnson's divisions being hurled against Chamberlain. The brigade was being slowly forced back, when Griffin brought up Battery B, 4th U. S. artillery, which opened an effective fire on the enemy, and at the same time parts of Gregory's and Bartlett's brigades were sent to Chamberlain's assistance. The timely arrival of these reinforcements, and the continuous firing of the battery, soon forced the Confederates to beat a hasty retreat, leaving about 200 prisoners in the hands of the Federals.

Warren reported the loss of Griffin's division as 370 killed and wounded. Among the latter were Gen. Chamberlain and Gen. Sickel. The Enemy's losses were not definitely learned, but Griffin states in his report that 130 of their dead were buried by his pioneers. After the Confederates were driven back the line was advanced to the Boydton plank road and intrenched. (See Five Forks for further information of this flank movement.)

Description of Gravelly Run from
"Happiness is not my companion"
By David M. Jordan 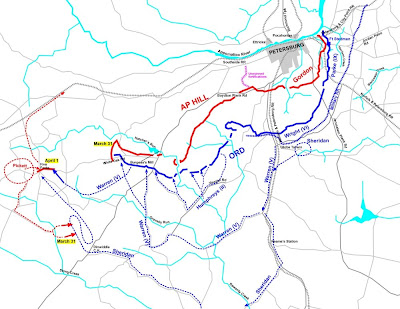